CommerceCX Would Like to Thank the Employees that Built It

In the business world, most of a company’s success is usually attributed to leadership. CEOs get spotlights and awards and professional profiles in major business journals - and they certainly play their part. But if you ask the CEO of IT consulting firm CommerceCX, he’ll be the first to tell you that all the credit for CommerceCX’s success should go to its employees.

If any CEO wears his heart on his sleeve it’s Vinay Toomu, who is rarely seen in the colder months without his bright orange CCX-branded sweatshirt. For Vinay, these colors really are about heart: the heart of the community he’s been a part of since CommerceCX’s founding. To him, CCX colors represent a team of hard-working, dedicated people committed to creating an environment of goodwill, support, and earned loyalty.

That personal connection has been the strength of CCX since its inception and Vinay has seen firsthand the power of prioritizing goodwill in business.

CCX's US headquarters has operated at Cornerstone Drive in Cary for seven years.

“One of the ‘aha!’ moments for me was one day about a year in, I get an email at like two in the morning.”

Vinay sits back in his chair, thinking. We’re sitting in the CCX conference room, which has been a site for meetings and community building both physically and virtually since CommerceCX first opened its central office at Cornerstone Drive in Cary in 2015.

The email was from Sanjay Nair, the first person Vinay ever brought into his newborn company. Sanjay was new to Salesforce and CommerceCX had devoted resources to his training and certification. This training and Sanjay’s consulting skills quickly made him one of CCX’s most valuable resources. But that meant others were starting to take notice.

“He tells me that he had two other companies that were pushing him hard,” Vinay said. “And had even made offers to join them.”

On paper, there was no contest. CommerceCX was only a year old and there was no way it could match the compensation packages of larger, more established enterprises. At CommerceCX, though, business isn’t about paper.

“We essentially dealt with each other more as family. And [Sanjay] saw the investments made and the chance I took on him.” Pride swells in Vinay’s voice as he reaches the turn of the story. “Looking at the positive mindset we were trying to build in the organization, he said he was going to stay and help build CommerceCX.”

For Sanjay, goodwill outweighed paper - and he’s stayed with the company ever since.

CommerceCX employees - who Vinay affectionately calls “our folks” - have a long history of choosing people over paper. Part of this comes from the company’s diversity: CCX folks come from every background you can think of. Our folks have been lab techs, car salespeople, school teachers, stay-at-home parents, and techies honing their skillset. A lot of them enter the company with no Salesforce experience at all. On that oh-so-important paper, these people have nothing in common; in practice, though, they all share one defining trait:

“All of these people have a lean-in mentality, close to zero ego. They never really feel like they’re walking around with a chip on their shoulder.”

Folks at CommerceCX are dedicated to their work and loyal to their team. They consistently show up for each other and their clients and work together to create an environment of learning and support. It’s incredibly important to Vinay to support this space and make sure employees don’t overstretch themselves or get burned out. He understands that people can only lean in if they have a strong foundation to balance on.

“We’ve generally invested ahead in folks,” Vinay explains. “Ring fenced them, provided them a safe space where they will not be judged. And then anywhere from 12 to 25, 30 months later, I’ve seen some amazing things happen in the organization.”

As long as people demonstrate commitment to their work and continue to improve themselves, it doesn’t matter if they’re currently generating revenue. It’s an investment: Vinay believes that by giving people resources to live, opportunities to learn, and space to make mistakes without fearing punishment, they will do great things.

Time has shown those investments consistently deliver. Employees that started at CommerceCX with no Salesforce or IT experience are now so established that new clients request them by name after hearing about their work on other projects. Folks’ nontraditional backgrounds have improved the company’s image, created connections in new industries, and sealed business deals that leadership might never have anticipated on their own.

And the best part? People stick around.

“Part of the gift that has happened with this is because of how we’ve invested and how they’ve come on board is we’ve had a long tenure of employment,” Vinay explains. “And they somehow continue to keep amazing me, how much they’re able to do outside and then make it a matter of fact to do the right thing for the organization.”

It’s not all sunshine and roses, though. CommerceCX has been through some tough times and its share of hardships. But by sticking together when others have fallen apart, CommerceCX folks have weathered storms that have taken down larger companies.

“It really came home to hit home for us when the pandemic hit.”

The weight in Vinay’s voice when he talks about early 2020 matches the weight everyone felt at the time. With international business grinding to a near-halt possible clients were less inclined to risk investments in other firms. As a small business in the tech industry, there were real concerns that CommerceCX might not make it through the chaos.

“I literally had to decrease everyone’s compensation by 20 percent, to make sure I was able to keep everybody in the Salesforce practice employed.”

This was a costly measure and a difficult decision. But a soft smile breaks up the seriousness in his voice when he remembers his folks’ reaction to the pay cuts.

“They just did not think twice about it,” he says. “Everyone was super energetic and happy to help. And eventually, two or three months into the pandemic, we were able to rebound really fast.” And we’ve paid back most of the forfeited salary.

While the Great Resignation swept through 2020, CommerceCX employees stuck it out, trusting in the company and their team to do what was best for them.

The company’s Chief of Staff to the CEO, Vicky Gaudet, attributes this loyalty to the community environment at CommerceCX.

“I think the reason people show up is because they are invested in the team they’re working with,” she says. “Whatever someone’s role is, if the relationship is strong then people will do the work, not because of what it is but because of who it’s for.”

Leadership played a part in weathering the storm, but really, CommerceCX folks did what they always have - they looked out for each other, had each other’s backs, and made each other and the company stronger.

It wasn’t just seasoned veterans, either. CommerceCX’s operations in India grew significantly in the winter of 2020, bringing on new team members with little experience with Salesforce or IT. The India team took ownership of the company’s accounting and bookkeeping responsibilities for both the India and the US entities, helping straighten out and streamline a system that had been thrown for a loop through the chaos of the pandemic, the expansion into India, and a transition from being a staffing agency to an independent IT services company.

Vinay now cites the India team as a major factor in CommerceCX’s recovery and growth.

“They were able to streamline operations to where I really was not having to spend a lot of time on it,” Vinay said. “That’s been super helpful and I’m very thankful for that.”

The CommerceCX mural, painted on the back wall of the Cary office.

It’s soon to be the end of 2022 and CommerceCX continues to grow and take chances. Some of these chances don’t pay off and some investments fall through. But Vinay knows the folks at CommerceCX can handle any challenge and he’s incredibly thankful for the work they do.

“I feel blessed, at all of these people who came out of the woodwork,” he says. “I’ve seen some amazing things happen in the organization, thanks to these people.”

And as CommerceCX folks have demonstrated time and time again, there will be more amazing things to come. 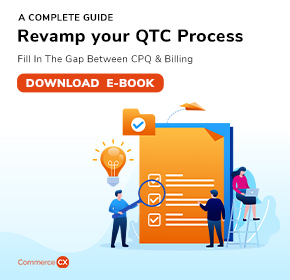