Stories of CCX: How A Business Analyst Rediscovered His Confidence After Transitioning Roles

How A Business Analyst Rediscovered His Confidence After Transitioning Roles 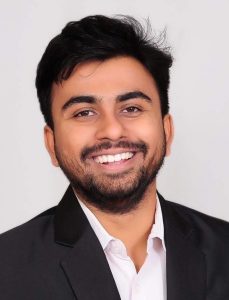 If there’s one industry known for its fast pace, it’s digital and information communication technology. With over 55.3 million IT professionals working worldwide in 2020, 641 thousand patent applications filed in 2019, and more than five billion internet users in the world today, you might expect working in tech to be an ever-changing, evolving environment. But that change isn’t static — it’s driven.

“I felt there is a lot of potential in the B2B, B2C consumer industry to apply cloud, analytical, and predictive technologies, which I developed interest in over the period. So, I wanted to change the scene.”

Krishna Teja Kuntamukkala — Teja, to his friends — has eight years of tech work under his belt, and that history is pretty diverse. He’s worked in computer forensics, data management, and back-end development, as a senior consultant, team lead, and project manager. In his words, he’s “worn many hats.” But something was missing, and as time passed, Teja started to look for different ways to apply his technical skills.

In 2021, Teja left a job at one of the Big Four consulting firms to enter a Tech MBA program at Walsh College in Troy, Michigan. While many developers at his level choose to pursue MSc degrees, he decided on an MBA instead to understand the nuances of business analysis and understand the nature of client-facing jobs.

“Salesforce is nothing but a huge database. The relationships between the databases are what we need to serve to the grander level,” he explains. “I wanted to get into this functional or technical role where I’m on the business side.”

Teja’s change of scene started at Walsh and came to a head in 2022 when he started working on client projects at CommerceCX.

CommerceCX can sometimes be a little daunting to recruits. CommerceCX’s training is based on the 70–20–10 model of learning, founded on the idea that 70% of valuable learning comes from hands-on experience. To facilitate that hands-on experience, interns and junior developers are assigned to work with senior developers and mentors on client projects.

While this focus on hands-on experience produces good results — Teja earned his Salesforce Admin and Business Analyst certification within six months — it’s still a work in progress. Client projects can have high stakes and a steep learning curve, and while each project has senior developers available for questions, it can still be overwhelming at first. Teja says he struggled when he first came to CCX with his decision to change career tracks and his uncertainty about his new role.

“The downside of it is this sort of self-questioning: ‘am I on the right path?’ ‘I was able to do well in the past; now what happened?’ All of this introspection.”

Teja’s description of this self-doubt is sobering, but his attitude is confident, and he’s quick to stress that while he struggled to adapt, he can now see a clear learning curve from where he started to where he stands now. This isn’t uncommon; researcher Brené Brown has observed that people often begin their success stories by describing uncertainty or discomfort. A lot of growth can come from places of uncertainty, and Teja says he doesn’t regret it.

A lot of learning came from working on that initial project, learning more about Salesforce and the quoting and order-to-cash processes, and simply gaining experience. Now, Teja wants to use that experience to help new people through the same process.

It’s hard to strike a balance between individual learning and community support. The key seems to be creating an environment of support, where people are given the freedom to work on their own, but have a support network they can approach when they have questions. Teja takes care to point out where specific people helped him along the way, which he says was a major factor in improving his confidence in his position.

“Vinay got me next to him, helped me to ring-fence my priorities and personally guided me on approaching Q2C business problems” he says about his early days. “Guiding me on the project. The time with him has really given me a perspective of how to go about a consultant kind of role.”

Thought leader Adam Grant talks about mentorship in his book Give and Take, describing how people who go out of their way to mentor and share their knowledge — who he calls “givers” — overwhelmingly improve business quality both culturally and fiscally. Generosity isn’t just nice to see, it has real, solid business results.

Teja says that if companies like CommerceCX pool their knowledge, through mentoring and internal training, it can lower training costs and improve the working skill of entire teams. Mentoring not only builds working bonds between coworkers, but it also improves the bottom line.

CommerceCX started formalizing this mentorship process in 2021 with the establishment of CommerceCX Academy, a company training hub intended to share the knowledge that our experts have collected over years of experience implementing digital systems across various industries.

“Economically, it is beneficial. And if I know something good — I know a good practice — and if I’m able to incorporate it into the team I’m working with, then there is a low investment but some bigger growth.”

What Teja is describing matches what organizational psychologists like Grant have been saying for years: that empowering generous people improves organizations “by every metric we can measure,” including financially.

An atmosphere of support has certainly improved Teja’s experience. At the beginning, fellow employees like Rick Williams, Vicky Gaudet, and Abhinav Kancharla helped him understand how the company worked. He says that if he ever has questions now, team members like Venky Muppalaneni and Sai Sagar are happy to help, and he’s had some very beneficial interactions with Sanjay Nair and Shravan Shirumalla.

“If I have any questions, I get a response quickly. I don’t usually have to go to anyone else.”

Teja explains that help from people like Venky and Sai was a big factor in gaining a sense of confidence in his position. He also remembers times when people went out of their way to spotlight his work: like when senior developer Tanya Porter recommended him for one of his current projects.

“I was assigned something last minute and I finished it well in time,” he says. “And at the next meeting about a new project, I felt great when Tanya spoke up and said ‘Teja should do it.’ And that laid a solid foundation for my inclusion in a client project.”

There are plenty of things Teja doesn’t know in projects like these: what the company is like, what their problems are, what can be done to provide solutions. But getting to learn about issues and build solutions lets him stretch those muscles that felt unused in his prior positions.

A few years ago, Teja knew everything there was to know about his work in tech. Now, his job is not knowing things; it’s learning things and putting that learning to use to develop a technical solution. He has changed his own corner of the tech industry — and he and CommerceCX are better off for it.

“I can directly contribute to client’s Salesforce implementations. Also, there is a lot of learning from all sides. And I think that is keeping up my spirit as well. Because I remember, if I look at my old pictures, I look older,” he says. “And now I look a bit younger.”