Stories of CCX: How A Full-Stack Developer Finds Meaning in Code

How A Full-Stack Developer Finds Meaning in Code

Do you know what a developer does? The technology industry employs almost 62 million IT professionals worldwide, with software developers making up a big chunk of that statistic. Developers write hundreds of millions of lines of code every day, programming utilities for every industry you can imagine. But what do tech workers actually do?

In the right circumstances? Change the world. 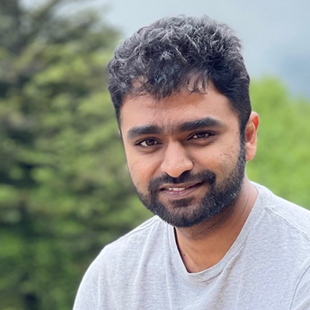 In 2021, full stack developer Santosh Reddy Gopu needed a change. He had a passion for development and years of experience but was starting to feel like he knew the answer to every question. He began looking for opportunities in the industry and found plenty, but nothing seemed to pose the kind of problems that would challenge him creatively. Then, he had a meeting with CommerceCX CEO Vinay Toomu.

“Vinay is an active person who likes to solve real-world problems,” he says, describing how the CEO caught his attention. “He was prepared from his previous experience. He got to know where the loopholes are and where processes could be improved.”

Santosh had plenty of experience in development—what he was looking for was a challenge, something that would drive him to use that experience to solve real problems. Vinay offered an opportunity to apply Santosh’s skills to solving real-world problems.

“The ideology was fascinating to me,” he says about his decision to join CommerceCX. “Seeing some of the projects that went live, the products that were developed. That was the kind of push that I was looking for. So, I felt like, okay, this is where I can maybe push myself out of my boundaries.”

Ideology might seem like a small factor in a multi-billion-dollar industry like tech development, but it means more than you might think. Per leadership speaker Simon Sinek, the meaning of someone’s work—what he calls the “why”—motivates every action a person or organization takes. Technology is mechanical, but development is human, driven by people like Santosh. And people want their work to have meaning.

Santosh works on CommerceCX’s product development team, which gives him a different perspective from most of the other CCX employees. He doesn’t do much work with Salesforce, for one, and he also rarely works on client-facing projects.

In some ways, this makes the process harder. Client projects offer more concrete limitations and external deadlines; there are more guidelines in place. But Santosh has found real satisfaction in creating something new.

“Client projects already have something in place. We are brought in to either enhance it, upgrade it, or replace it with a better solution,” he says. “Product development has its own challenges, since it’s totally on the creative side. We need to nurture it. We need to develop it and think on it.”

This creativity provides a unique challenge, made more interesting by working with Santosh’s team. The CCX product development team mixes folks from different backgrounds, with different levels of IT experience. Santosh’s colleague, Haritha Peddireddy, says that the product team has become a closely knit unit in their time together, always ready to help each other out.

“We have lunch together, we work together, discuss everything,” she says. “So, we are close.”

A project lead schedules meetings and facilitates discussion, but overall, everyone on the project has a voice and the opportunity to share their perspectives. Researchers like Erin Meyer have found that flat organizational structures like those at CommerceCX inspire innovation and keep employees engaged. On Santosh’s team, this translates to few meetings and plenty of focus time.

“We do not have many meetings because we don’t work with clients. We have a morning meeting, maybe we discuss any issues or any new features we want to work on or what functionality we want to include. And then most of the day, I just work on the thing itself.”

This approach can sometimes feel messy, but it offers a flexibility that lets each member of the team work according to their work style. Santosh’s process is almost hyper-focused. Once he has something to build, a problem to solve, or a question to answer, he wants to sit down and work on it until it’s finished. His ideal working style is taking a problem and working with it, uninterrupted, until he finds a solution.

“If you give me any problem, then I’ll sit with it,” he says, about his process. “I’ll sit with my laptop and work on it until it gets fixed. That’s my mentality.”

But who does this work actually help?

Santosh enjoys the work he does, but he grows more animated when he talks about its “why”—its purpose. Santosh and his team are building a platform designed to help small and medium-sized businesses take advantage of the same digital sales systems as large enterprises. By reducing costs for Configure, Price, Quote (CPQ) and Quote-to-Cash (QTC) software, Santosh’s team hopes to democratize an inaccessible resource.

“In bigger companies, you have many resources and a lot of budget for every quarter,” he explains. “But small and mid-sized companies don’t have that kind of budget to invest on these things.”

This is a major differentiator in the B2B space. Just a 5% increase in revenue can change lives for smaller firms, and digital CPQ and QTC systems can be game changers in scaling that revenue. They can eliminate human error, free up valuable time, and reduce costs company-wide. But implementing new technology can be a gamble—and it can get expensive.

“Bigger companies, they have their own thing they can customize for themselves, but these products are really not affordable to smaller, medium-sized companies. So that’s where we come in.”

Even if smaller firms have the financial resources to purchase platforms like Salesforce or Conga, they don’t have the same safety net as enterprises. If an implementation fails or is implemented improperly, it can significantly damage a small company’s business process and revenue. This lack of accessibility creates an uneven playing field, where enterprises always have an advantage.

Santosh and his team are working to change that dynamic—and change the playing field.

“When you develop a product that caters to the needs of smaller, medium-sized companies, give them the same tools as enterprise-level companies, their revenue grows,” he says. “Which in turn grows the revenue of the entire economy. And that way it helps everyone.”

It’s the “why,” back again. Santosh could do development anywhere—full stack developers are heavily in demand—but here, on this project, he has the opportunity to effect real change. To improve lives.

Product development isn’t for everyone. Developing new software can improve lives and ease stress, but development takes time. Even when products launch, they’re often introduced to customers by a sales team, not a developer. But Santosh is uniquely adept at seeing the impact of his work, even at a distance.

“I don’t really know a client’s experience or what they feel like when they hear about a solution or when they use a product,” he says. “But I hear from others about what happened and what they felt like. So, that gives me a sense of happiness: something I worked on is helping people.”

Development is a long game. It involves trust and faith that Santosh and his team are building something that will improve someone’s life, something that they may not ever see with their own eyes. But Santosh doesn’t have to see it to know it’s there.

“Knowing that what I worked on is helping people out,” he says. “That’s all I’m looking for. I mean directly, or indirectly, if it helps someone? Then I’m satisfied.”

So, what does a tech worker actually do? He solves problems. He challenges himself. He pushes his boundaries. He shares his knowledge. He supports his team. He changes the world for the better.